I like to watch Crash Course videos while I’m exercising. I find that the harder I work my brain, the harder my body works. It happens without any conscious effort on my part. It’s kinda great.

So just now, I was watching a couple of episodes of Crash Course Chemistry. In the first one, Hank was talking about how Mendeleev (and some other guys) recognized the patterns in how the different elements behaved to come up with the Periodic Table of Elements. In the second one, he was showing how you can use a musical analogy to illustrate the patterns in the elements.

It got me thinking about pattern recognition. Sometimes it seems like the entire purpose of humanity’s existence is to recognize and appreciate patterns. Like the energy we put into creating art and music, is just playing with patterns, isn’t it? All of our technology requires the manipulation of physical objects, which follow the laws of physics, and later less physical objects (like on the internet and whatnot), which follow a slightly different set within the laws of physics, to conform to certain patterns in order to make them do what we want them to do within the context of reality as we experience it. The data that is collected in all of the hard and soft sciences is analyzed for patterns in order to discover some new Truth (with the Truth itself being the recognition of a pattern). Our brains automatically sort and categorize every bit of input that they receive according to patterns. Our obsession with human beauty is really a search for some ideal type of pattern, factoring in things like symmetry, proportion, color combinations, grace of movement, harmony of vocal emissions, etc. The body creates dopamine and other feel-good chemicals and hormones by physically combining elements into particular patterned combinations to reward us in our constant pursuit of patterns in a (presumably) never-ending cycle of pattern-ness. I question the never-ending-ness because this could be some sort of spiraling inward (rather than outward), like the Golden Mean/Fibonacci spiral, which seems to be incorporated into a great deal of Creation as we know it. But that pattern is still too big for me to comprehend at this time.

I often think that Earth seems like an agricultural experiment, sowed by some sort of extraterrestrials who want to grow/produce… something. Maybe technology. Maybe they have a use for our waste products, just as we use the waste of worms and of farm animals and of the bacteria in our digestive tracts. We certainly produce a lot of pollution. Or maybe we’re intended to produce patterns. But crop circles (if you think they’re real) seem to be very focussed on patterns. As if some fertilizer is being added to renew our efforts and interest. 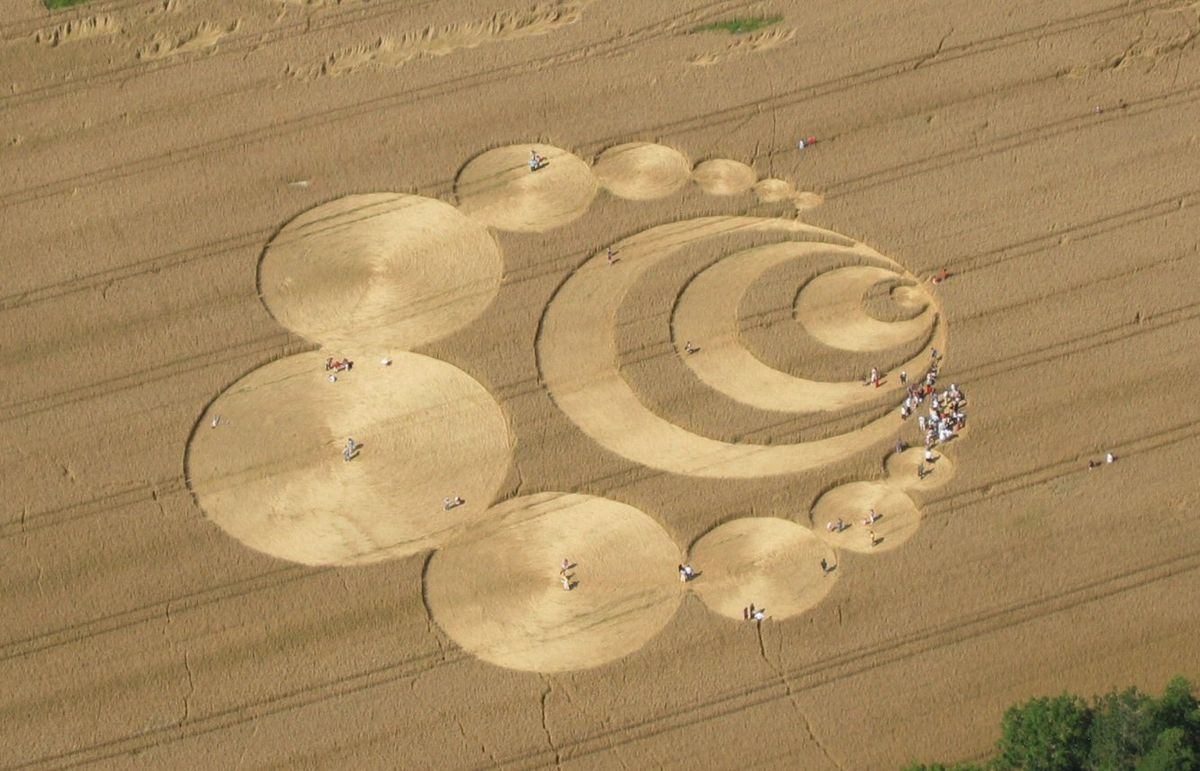 Ok, that got kinda weird. But speaking of aliens, I kind of relate to this one a bit: